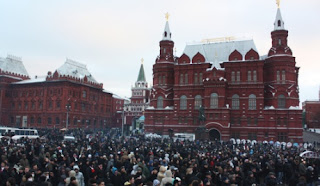 Staunton, December 19 – The disorders in the streets of Moscow and other cities of the Russian Federation are calling into question the relationship between the Russian Orthodox Church and the Russian regime, with the church distancing itself from the state and the state no longer able to count on the unquestioned obedience of the church.

Yesterday, Archpriest Vsevolod Chaplin, head of the Moscow Patriarchate’s Department on Relations between the Church and Society and a protégé of Patriarch Kirill, made a remarkable declaration to a Moscow roundtable on recent developments of inter-ethnic relations in the Russian Federation (www.interfax-religion.ru/?act=news&div=38770).

Specifically, he said, “it is evident that the majority of the population of the country is not compoletely satisfied with the social difficulties which exist, the acitons of particular representatives of diasporas, the gap between the people and the taking of decisions, corruption, illegality, and the total lawlessness of local powers that be.”
“If the powers that be would listen to the people, then and only then would the people acquire a firm footing. The powers that be today must listen not to the elites but to the people, and the elites, if they have a sufficient level of intellect and expertise must be able to convince the people that what they propose are really useful for the people.”
And, in the words of the Interfax report, Chaplin argued that “if however the elites cannot convince the people in the correctness of their recommendations, then they ought to move to the side.” Indeed, he continued, those elites who “already in the 1990s attempted to construct nationality policy … do not have long to do so.”
They have perhaps “about six months,” the archpriest suggested.

Two other churchmen have extended this argument. In a commentary for Portal-Credo.ru, a site not known for its sympathy to Kirill, Bishop Grigori suggests that “the disorders in Russia [are] a stimulus for the liberation [of the Russian Orthodox Church] from Sergianism,” the system in which the Soviet state allowed the church to reemerge in exchange for total loyalty.

According to Grigori, the inability and unwillingness of the Russian bureaucracy to respond to the needs of the population has forced the latter into the streets to try to gain influence over the powers that be. But that shortcoming also has called into question the relationship of the Church to the state (www.portal-credo.ru/site/?act=comment&id=1816).
“Mechanisms of direct democracy put on the agenda questions of moral authority, including the authority of religious organizations and religious leaders,” the bishop says. Not surprisingly, the Moscow Patriarchate initially reacted to the disorders as it typically has as little more than a spokesman for the state. But it could not remain there for long.

It tells the powers that be that they cannot bet on the “ruling Church” because that will not add to their authority and that the Church which doesn’t want to sacrifice its relationship with the state nonetheless is concerned about losing any remaining moral authority it has with the population by supporting what is a weak and ineffective power.

The bargain Sergii, the first patriarch of Soviet times, achieved was premised on the existence of a strong state, Grigori continues. But “when state power itself is in doubt, then it won’t happen that even officially supported churchmen will throw themselves into battle in its defense.” Instead, they will look to their own interests, including moral ones.

“Dependence on state power and moral authority are mutually exclusive things,” the bishop points out, noting that “No one will in fact argue with this. Simply the Sergian understand of the Church presupposed reliance not on the people but on state power,’ an arrangement that requires the state to keep up its end of this bargain.

Another perspective, albeit an even more radical one, is offered by Archpriest Gennady Belovolov, a Saint Petersburg pastor, for Ruskline.ru. In an essay entitled “Between loyalty and disobedience,” he points out that “the question of the relationship of an Orthodox beliver to the current Russian powers that be is complicated and varied for many reasons.”

The Orthodox could never be completely loyal to Soviet power because it “forcibly replaced” God’s anointed on earth, the tsar. Now, in the wake of Soviet power, “we must understand that democracy is a product of human passions and sins, and one shouldn’t expect miracles” (www.ruskline.ru/news_rl/2010/12/16/mezhdu_loyalnostyu_i_nepovinoveniem/).

But nonetheless, the archpriest says, Russians and the Church have the right ”to demand some minimum from this power, that it observe certain rules of the game, that it not interfere with the ability of the people to life, toil and pray …We understand that without power, society will dissolve into chaos, but the powers must not push society into that condition.”
As the Gospels teach, “all power is from God,” but this power may be a blessing or a curse. “And if we ask ourselves: is the current power one or the other, then what will be the answer?” Is it a blessing to the people or something else? And “can an Orthodox say that the current power is a blessing of God to our land?”
Yet another church commentator, Archpriest Aleksii Lebedev suggests that the Moscow Patriarchate has not yet made the decision to make the change from a helpmate to the state to a source of moral authority and will continue to show that “stones for it are dearer than human souls” (www.portal-credo.ru/site/?act=comment&id=1817).

But within the Russian Orthodox and even within the Patriarchate, at least some are thinking about such a shift so that “if the winds change, they will be able to say that ‘we always’ thought so,’ and to show as an example the words if not of Patriarch Kirill then those of fathers Vsevolod Chaplin and Andrey Kurayev.”
However, the clearest indication that things are changing is to be found in a document adopted by the hierarchy this past week. It asserts that the Russian Orthodox Church continues to oppose having churchmen run for office but that in cases of “extreme church necessity,” they can do so (rus.ruvr.ru/2010/12/17/37104210.html).

Such a formulation suggests that the Church will decide when that is rather than anyone else, a shift in position that opens the way to a very different role for the hierarchy within Russian society and one that suggests the civil powers that be may face competition from a corner they never anticipated.

Chaos in Milan: Spain Refuses to Go Along