On May 25th, 2012, former Met. Jonah of the OCA, along with Fr. Anthony Bondi of the ROCOR-MP western rite vicariate, addressed a convocation of Protestant Anglican clergy and laity.  During the convocation, Fr. Anthony Bondi, with the permission of ROCOR-MP First Hierarch, Metropolitan Hilarion (Kapral), put forth a plan to absorb wholesale the Continuing Anglican churches with little to no changes, other than already agreed upon ecumenical statements made between the Anglican Communion and the World Patriarchates. Among these was the continued use of modified Protestant Anglican services (such as the Book of Common Prayer). It is no secret that the ROCOR-MP is planning on ordaining 20 new priests to service in its western rite vicariate; this has even caused concern among ROCOR-MP clergy and laity as the past experience with previous clergy taken in with little or no training or formation from other groups have proven problematic to say the least. Perhaps the most disturbing element of the upcoming 20 ordinations (assuming they go forward), is that many of these soon to be ROCOR-MP clergy have objected to the slightly Tridentinized Prayer Book services of the Anglican-Antiochian Rite of St. Tikhon (which is a misnomer, the rite of St. Tikhon is no more than the Anglican/American Missal modified by Antiochian clergy in 1977, with a strengthened epiklesis in the Protestant Anaphora) as being “too Catholic”! Instead, it has been proposed that they continue to use the 1928 Protestant Episcopal Book of Common Prayer.

Further issues have continued to plague the ROCOR-MP western rite vicariate as time continues; including extreme in-fighting between Bp. Jerome (Shaw) and other prominent ROCOR-MP clergy, trading of accusations and insults, problems with clergy education, and the predictable back-lash against the ideas of Bp. Jerome and Met. Hilarion by other ROCOR-MP bishops. Other issues involve continued personal battles between ROCOR-MP western rite vicariate clergy and the pastoral vicar of the vicariate, the aforementioned Fr. Anthony (Bondi). This was most notably manifested in a very public remonstrance given by ROCOR-MP priest, Fr. Nathan Monk; Fr. Nathan, as well as other vicariate clergy, left the western rite to conform to the standard liturgical praxis of ROCOR-MP, and objected to characterizations about their motives. As I and many other have covered at different times and places (see here and here for my own personal take on some of these matters-Fr. Enoch), many of these issues are resultant fall out from the wholesale absorption by ROCOR of many different groups it took in a few years ago.

What is interesting, however, is the suggestion that the continuing Anglican clergy join the World Patriarchates, and be ordained priests in such. We can assume it would be the Moscow Patriarchate; one wonders how this would take place? Met. Jonah has stated in the past the possibility of a non-geographical Anglican rite diocese. Would the MP actually do this? Or would it rather have them taken in by ROCOR-MP itself? However, if such a move actually transpired, would it not meet the same fate as the well-known Central American debacle, wherein, Bp. Jerome and others had seemingly organized the reception of a massive 250,000 or so person independent church to join ROCOR-MP following a Tridentine-style western rite, only to have the plans nixed after complaints from ROCOR bishops and clergy, when they realized that the new comers would far outnumber ROCOR-MP? In that case new requirements were placed upon the aforementioned independents: they should all transition to the standard Russian Orthodox liturgical praxis after a period of time. Of course, such stipulations were rejected, and the plans were called off (but, not without Bp. Jerome publicly eschewing those that he felt were responsible for such a move). How would such a similar fate be avoided for these Anglicans?

Yet, the obvious problems of the continued use of Protestant derived Anglican services in ROCOR-MP, along with the fact that ROCOR-MP is a member of the World Patriarchates (and thus, from a traditionalist perspective, not Orthodox) are perhaps the greatest problems in this whole mess. It would seem that anything is being considered to off-set the large scale losses ROCOR suffered in the lead up to the unia with the Sergianist Moscow Patriarchate. By adding additional numbers, they prove to Patriarch Kyril that they are ‘growing’. A large portion of the ROCOR-MP membership has died. Perhaps some of the real motivating factors keeping this alive is the prospect of additional parish income sources?  It can be expected, that, any new parishes joining ROCOR-MP would not only be a propaganda coup for Met. Hilarion (Kapral) and Bp. Jerome (Shaw) to tout in Russia, but, it would also largely help with the financial crisis currently being experienced in ROCOR-MP (for example, the issues with Jordanville and the old Synod HQ).

Pope in Brindisi, Greek Orthodox Metropolitan with him 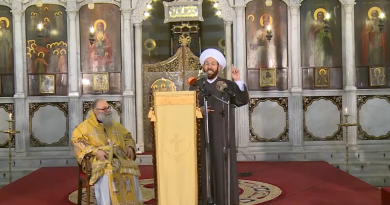