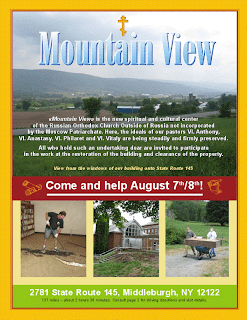 Middleburgh, NY, July 31, 2010. – The Board of Directors of the Mountain View Russian Orthodox Church,
Inc. (“MVROC”) announced today that it is launching the formation of a Russian Orthodox spiritual and
cultural center. Located about 150 miles from New York City on 56 rolling picturesque acres, it comprises a 40-
room early 20th century mansion and various auxiliary buildings. Upon completion of extensive repairs and
renovations, the center will include a Russian-Orthodox chapel, a library, guest rooms, meeting halls and other
facilities for conducting worship, maintaining a Parish and support a variety of Russian-American Orthodox
cultural/spiritual endeavors.

Commenting on the goals of the Center, here is how it’s President, Mr. George Lukin, put it: “The main
goal of the MVROC is to provide Russian Orthodox believers with an opportunity to confess their faith – the traditional Russian Orthodoxy – in a free and reliably-stable environment.

To unflinchingly, and firmly preserve the behests of the Metropolitans of the Russian Orthodox Church Outside of Russia (“ROCOR”) Anthony, Anastasy, Philaret, and Vitaly, and follow their irreconcilable position toward the Moscow Patriarchy (“MP”). To provide the material base and support for uniting and strengthening ROCOR, as well as to give the opportunity to those who erred in making their choice on May 17, 2007 to find the true path.” 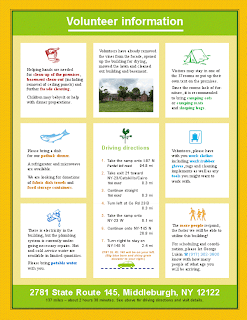 St. Hormisdas [+420] and the Persian Martyrs

Epistle of the Hierarchical Synod of the ROCOR (Anthony – Beltsk / Moldova)