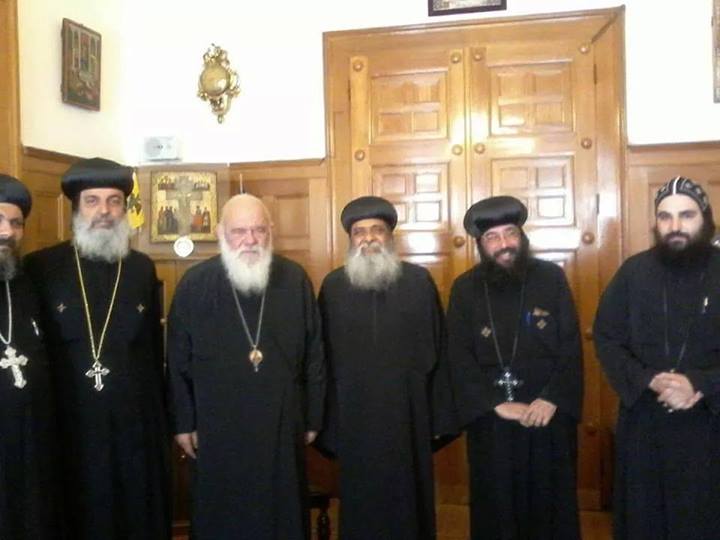 Reported on May 28, 2014 (Source: theorthodoxchurch.info)

Athens: With the  blessings of  Pope Tawadros II a  high level delegation of the Coptic Orthodox Church of Alexandria and All Africa made a historic visit to the holy monastic republic of Mount Athos on 25th of May 2014. Archimandrite Ephrem President of the Vatopedi monastery “burning Bush” in northern Greece and Mount Athos received the delagation of the Coptic Orthodox Bishops.

The Coptic delegation was led by Bishop Anba Paulose of Athens and all Greece and included Bishop Julius of Ancient Egypt, Bishop Anba of the Eastern headquarters, Bishop Makary of South Shubra and other prelates.

Detailed discussions on Coptic Monasticism and Eastern orthodox monastic traditions took place. Also the current situation of the life of Coptic Christians in Egypt were also discussed. Special greetings to Pope Tawadros was send by the Abbots in Mount Athos.

Patriarch Scheduled to Concelebrate (in a Limited Fashion, of Course) for Papal Pauline Year Mass