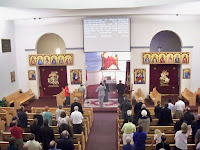 (Hat Tip: F.A.)  The Orientale Lumen Conference, a yearly gathering of ecumenism’s top partisans, has begun letting out some info for this coming year’s conference. Here’s a sneak preview of this year’s stuff.

Titled:  Rome and the Communion of Churches:  Bishop, Patriarch, or Pope?”,  it surely will be an interesting event.

Persons invited to come speak are as follows:

The agenda will begin on Monday afternoon and conclude with a luncheon on Thursday.  There will be plenary sessions by prominent speakers in the ecumenical dialogue between the Catholic and Orthodox Churches, a variety of liturgical services, and many opportunities for fellowship.

Gay Pride parade organizers determined to hold it in Moscow