Indeed, the Roman Catholic bloggers who started up the engine for the “intercommunion” train are putting the brakes on it as quickly as possible (see here for example), perhaps afraid of repercussions in the face of recent public attacks against voices opposed to ecumenism, such as Bp Diomid of Moscow and Esphigmenou Monastery on Mount Athos. Such attacks have actually turned more of the laity of the official Churches against ecumenism, and Orthodox traditionalists in Greece, Russia and elsewhere are now showing themselves fully ready to absorb any waves of disaffected laity, putting to rest the lie that the traditionalists are too disorganized to act as a force against ecumenism.

Certainly this retraction on the part of the Patriarchate should not be considered a movement away from ecumenism. Asia News reports that “Bartholomew I himself, in a highly significant symbolic gesture, gave a chalice to the new Greek Catholic bishop of Athens, Bishop Salachas. “The chalice of our shared communion”, he commented, “must be our point of reference”. (Link to that article here, along with more background of what is really happening.)

And that was in May, as Bishop Salachas of the Greek Uniates was only recently ordained.

In context, this is the only direction the Patriarchate could go; faced with being shunned by Moscow for attending anniversary celebrations for the Baptism of Rus’ in Ukraine, which led to a flurry of complaints from Moscow Patriarch Alexey II, the idea of proposing to the Uniates a “dual-communion” between Rome and Constantinople (read: not Moscow-controlled) forced the Ecumenical Patriarch to reverse what may well have been his position, and certainly not the first time such a thing was suggested to the Uniates by official Orthodoxy.

But the most telling proof of this was that the statement of the Greek Patriarch on the matter of the Uniates appears on the English page in two languages: English… and Russian.

What’s a new OCA Primate to do? Meet with the Conservative Anglicans 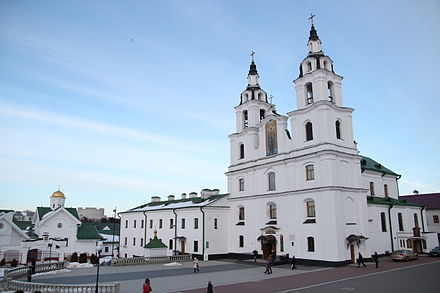 EP on “60 Minutes”: Comments by Abp Chrysostomos of Etna