An Extract from Homily 160, A Fourth on Epiphany (Theophany)

Although in the Mystery of the Lord’s Incarnation itself there were clear signs of His Eternal Divinity, nevertheless today’s Feast discloses and reveals in manifold ways that God came into a human body, so that mortality, always enveloped in darkness, may not lose through ignorance what it has been made worthy of holding and possessing through such great Grace. For He Who Willed to be Born for us did not want to remain unknown by us; and so He discloses Himself in such a way that the Great Mystery of His Merciful Kindness may not become a great occasion of error……

Today Christ entered the River Jordan to wash away the sin of the world. John himself attests that He came for this reason: “Behold the Lamb of God, behold Him Who takes away the sin of the world.” Today the servant clings to his Lord, a man clings to God, John clings to Christ. He clings to Him in order to receive pardon, not to grant it. Today, as the prophet says, “The voice of the Lord is over the waters.” What voice? “This is My Beloved Son, with Whom I am well pleased.”

Today “the voice of God is over the waters,” because God the Father, in order to verify His Son’s lineage, is Present Himself as his Own Witness to assert: “This is My Beloved Son,” because the Son has no one else to provide testimony. The Sanctuary of the Father has no observer; the Divine Generation knows no witness. The Divinity of Christ receives no investigation from outside as the Son Himself says: “No one knows the Son except the Father, and no one knows the Father except the Son.”

Today the Holy Spirit hovers over the waters under the appearance of a dove, so that, just as that dove announced to Noah that the flood that inundated the world had subsided, so too by this sign it would be known that the unremitting shipwreck of the world had come to an end. But it did not carry a branch from the old olive tree, as that one did, but pours out rich, new chrism all over His Head as Parent, in order to fulfill what the prophet said: “God, Thy God, hath Anointed Thee with the oil of gladness before Thy fellows.”

Today “the Lord is over the waters.” Correctly does it say “over the waters,” and not “under the waters,” because Christ is not a servant to His Baptism, but He has authority over the Sacraments. Today “the God of Majesty thundered.” And if the Father thunders from Heaven, if the Son stirs up the waters of the Jordan, if the Holy Ghost appears in bodily fashion from on high, why is it that the Jordan, who fled at the presence of the Ark of the Covenant, did not run away when the Whole Trinity is Present? Why is it? IT is because the one who shows homage and deference begins to be fearful no longer.

Here the Trinity puts all Its Grace into operation and expresses all Its Love for the world; on that prior occasion God took hold of the elements in order to instruct His little servants to fear Him. Nevertheless, int he midst of these evens so awesome and great, John stands undaunted, because he is unable to be afraid, since the angel has testified that he was born entirely for the love of God. 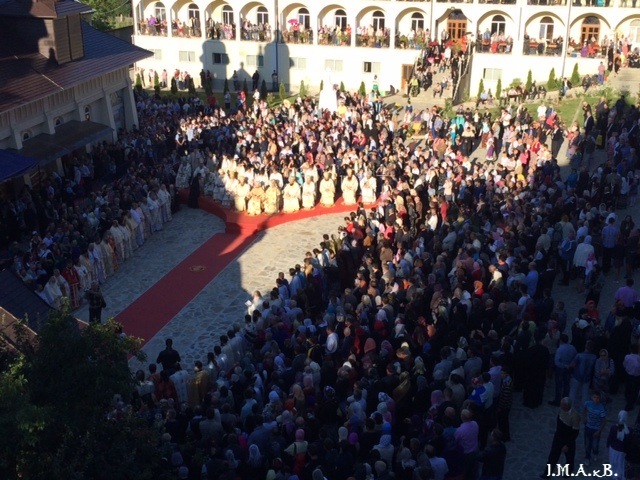