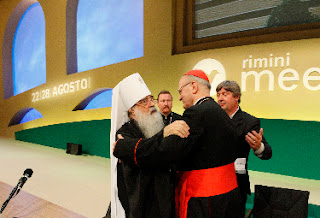 Cardinal and Metropolitan Show Will for Unity at Rimini Meeting

(Zenit.org).- High-ranking representatives of the Catholic and Russian Orthodox Churches embraced on Monday in a moment reflecting a will for unity between the two Churches.

A photo of the embrace between Cardinal Peter Erdo and Metropolitan Filaret was printed with the title “Europe’s Brothers.”

The embrace between the two high-level representatives was a highlight of the 31st Meeting for Friendship Among Peoples, an annual event sponsored by the Catholic Communion and Liberation Movement in Rimini, Italy.

The cardinal and metropolitan made their embrace of unity as they joined in a debate on the topic “Can An Educated Man, a European of Our Days, Actually Believe in the Divinity of the Son of God, Jesus Christ?”

Cardinal Erdo is the archbishop of Esztergom-Budapest, Hungary, and the president of the Council of European Bishops’ Conferences (CCEE). Filaret is the metropolitan of Minsk and Sluzk and Patriarchal Exarch of All Belarus.

The Catholic and Russian Orthodox Churches are already united in their common stance on many issues affecting Europe: challenges to life and family and religious freedom among them. Recently, an apostolic nunciature was opened in Moscow, and there is ever greater insistence on a meeting between Benedict XVI and Orthodox Patriarch Kirill of Moscow and All Russia.

To this end, Metropolitan Filaret said that “the time is ripe for a meeting between the Pope and the Patriarch. It might even be possible in 2011; in principle I see no obstacles,”

“We have been in dialogue with the Catholic Church for some time, at times with moments of exhilaration, at others with a fall in tensions,” he added. “Now we are in a moment of stability, but between us, we, the parties, are open to dialogue. I hope this atmosphere will continue.”

Cardinal Erdo pointed to Catholic-Orthodox union in dogmatic issues. “Hence, for me,” he said, “the circumstance that we are not in full and complete communion is a physical pain.”

The cardinal and metropolitan considered the debate topic on Christ’s divinity, a theme drawn from notes of the novel “Demons” by Fyodor Dostoyevsky. It reflects a question among the European elite of the 1860s, which returns with burning timeliness.

Filaret observed that “Europe is completely changed; European man has changed to the point of being irreconcilable. However, the question is always the same.”

He reflected on the doubts plaguing Europeans of our day and suggested a “lively conscience” to overcome them — a conscience that “does not grow silent, but that sets afire the lies that deceive the heart, and unmasks the sin that besieges the soul.”

“We must pray so that the Lord will help our faith because everything is possible for one who believes,” the metropolitan concluded.

For his part, Cardinal Erdo pointed to the contradictions in contemporary European intellectuals.

He suggested that a “trite atheism” and the “famous historical and dialectical materialism of traditional Marxism” do not seem attractive. But, pantheism is fashionable, he proposed.

“If the man of today asks himself seriously the question on the existence of God, absolute, transcendent and personal, he must investigate also the possibility of communion between God and man that took place in Jesus Christ,” the cardinal said.

“God is only one, and only one is the mediator between God and men: the man Jesus Christ,” stressed Cardinal Erdo. Because of this, “we must be messengers and missionaries of the new evangelization of Europe. We must be united with our other Christian brothers, because unity can reinforce our testimony.”

VIDEO: MP Priest Tries to Venerate Putin, Who Gets Mad