We didn’t even have to change the title for this joint RC-GOA prayer! Though we prefer the marker “Roman” to the term “Catholic” here to distinguish. The surprise ending was just… well…. NFTU

ATLANTA—The spiritual leaders of the Greek Orthodox and the Catholic churches will together lead a prayer service as part of the Year of St. Paul celebration.

Metropolitan Alexios and Archbishop Wilton D. Gregory along with their faith communities will commemorate the birth of St. Paul some 2,000 years ago.

The service on Wednesday, May 6, at 7 p.m. at the Cathedral of Christ the King, Atlanta, will feature choirs from both the Cathedral and the Greek Orthodox Cathedral of the Annunciation. Both archbishops will speak at the evening service.

“It is not merely an exchange of courtesies between churches. It is a commitment of both churches to do everything possible to cooperate, to pray together,” said Msgr. Henry Gracz, the pastor of Immaculate Conception Church and a long-time leader of the ecumenical movement.

Very Rev. Father George Tsahakis, chancellor of the Greek Orthodox Metropolis (Diocese) of Atlanta, said, “It should truly be a wonderful night. We are going to offer glory to God.”

The ceremony strives to promote unity and the shared love of the risen Christ, he said.

This past year, the church has honored St. Paul, the most prominent person in the New Testament after Jesus. Thirteen books in the Christian Bible bear his name. He was a Jew, like Jesus, who before his commission as Apostle to the Gentiles persecuted the early church. Afterwards, he spread the Christian message around the Mediterranean.

St. Paul’s birth has been used as a way to bring together the two churches after the division of the Greek Orthodox and the Catholic churches in 1054. In 1965, the decree of excommunication was lifted and dialogue began.

According to Father Paul Burke, a parochial vicar at Holy Spirit Church, Atlanta, there has been greater exchange between the churches since the 1960s since the reconciliation began.

In recent times, church leaders have worked to bridge the division. And the Year of St. Paul has been one of those opportunities. In June 2008, at the beginning of the Year of St. Paul, both Pope Benedict XVI and Greek Orthodox Patriarch Bartholomew I of Constantinople preached at Vespers.

In October, for the first time, Patriarch Bartholomew addressed a gathering of Catholic bishops at the Vatican. He received a standing ovation from the church officials after his talk.

Father Burke wrote in a statement that he hoped the joint service leads to “ongoing prayer and dialogue with our sister churches.”

According to the story told to Father Burke, the pope blessed the rosaries and then said to Archbishop Demetrios, “Now, my brother, you bless them too.”

Russian Catholic Archbishop: We are following the rules of ecumenism 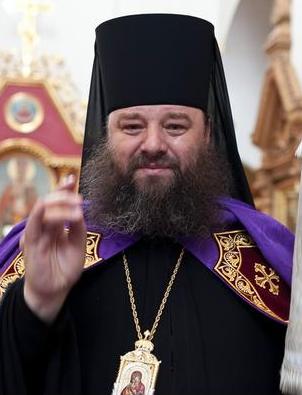 Non-Commemorating MP Bishop to other World Orthodox: “Return to the Church; Grace has left you.”

Vatican and SSPX Have Dispute Over Jewish Remarks