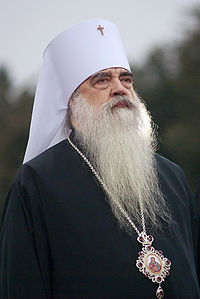 Minsk, Belarus, Jan 30, 2011 / 07:20 pm (CNA).- Catholic leaders in Belarus celebrated the annual week dedicated to Christian unity by gathering and breaking bread with local heads of Orthodox, Lutheran and other other Christian denominations.

From January 18 – 25, Christians around the globe marked the Octave of Prayer for Christian Unity,  a time when members from various denominations traditionally meet to pray together for unification efforts among the faithful.

In Minsk, the capital of Belarus, Catholic Archbishop Kondrusiewicz and Orthodox Metropolitan Filaret of Minsk and Sluzk hosted various initiatives, including daily prayer with Belarusians from numerous Christian backgrounds and traditions.

At a joint celebration on Jan. 22, at the Cathedral of the Blessed Virgin Mary in Minsk, Catholics, Orthodox, Eastern Catholics, Lutherans and Christians of other denominations gathered to pray, preach and symbolically share a large loaf of bread.

In a Jan. 20 interview with global charity Aid to the Church in Need, Archbishop Kondrusiewicz remembered the words of Pope John Paul II, who said the churches in East and West were like two separate “lungs” and that “Europe must breathe again with both lungs.”

The archbishop said that not only do all the Christian denominations “share the desire for unity,” but that they also seek  dialogue with the Jewish and Muslim communities as well.

Archbishop Kondrusiewicz said that the relationship between the Orthodox and the Catholic Churches is very peaceful and cordial. The Orthodox Church accounts for roughly 80 percent of the citizens of Belarus, while 14 percent or around 300,000 are Catholics.

He said leaders from both traditions meet together regularly, and both churches see it as their common mission to live the Christian faith and share it with others.
Archbishop Kondrusiewicz also spoke on the issues that individuals are facing in modern Belarus such as alcoholism, drug addiction, and high rates of divorce and abortions. He said that these problems call upon Christians more than ever to unify and be effective witnesses within society.

“Giving witness means that all the faithful, and above all the laity, are called to become more active,” he said.

Adding Sergianism to Cyprianism: The Latest Works of the Synod of Kallinikos GOC. by Bishop Philaretos of Pallini and West Europe