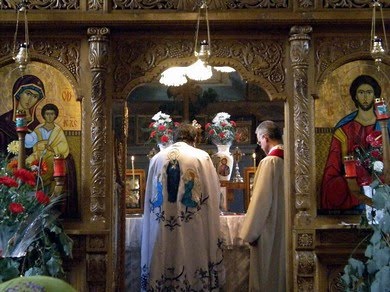 If Metropolitan Nicolae Corneanu is behind this, then we can guess the “slap on the wrist” was indeed just for public consumption….
(Source: Rorate Caeli) Vassula Ryden, a visionary known for her “private revelations” that promote indifferentism, and who continues to be enthusiastically supported by many Catholic and Orthodox clergy and hierarchs despite occasional warnings from the Vatican (and a few from the Orthodox Churches), enthusiastically relates in the latest report on her website that as part of her Mission in Romania on May 2010, a Romanian Orthodox priest invited a Roman Catholic priest to concelebrate the Divine Liturgy of Pentecost.
The Romanian priest is Fr. Daniel Crecan, who is also identified in the report as a Romanian ORTHODOX (not Greek Catholic) parish priest in Bocsa Mantana of the Orthodox Eparchy of Caransebes. The Roman Catholic priest is named as Fr. Rolf Philip Schoenenberg. 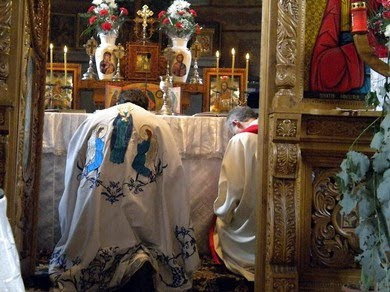 The report further states that communion was given to the Catholics present, and alleges that Vassula’s mission trip had the support of the Orthodox Metropolitan Nicolae Corneanu, who made headlines in 2008 when he received communion at a Greek Catholic Divine Liturgy. (Note from NFTU: Below is a picture of the priest communing Greek Catholics with the spoon, according to the report.)

(The report also makes the erroneous claim that Patriarch Kirill had invited Pope Benedict XVI to visit Russia, and quotes Vassula as stating “An Orthodox will not become Catholic, nor is there a need for a Catholic to become Orthodox. We are asked not to differentiate among us, but to respect each other’s traditions and celebrate around one altar. The Eucharist must be shared by all.“)

Uniates in Ukraine call for “Primitive Unity” with the Orthodox