From the Secretariat of the Holy Synod in Resistance

22 September 2010 (Old Style)
5 October 2010 (Secular Calendar)
The Hieromartyr Phokas
Late in the afternoon, today, His Eminence Bishop Chrysostomos (alemangos) of Sydney and New South Wales, reposed in the Lord at the City Hospital in Kalamata, Greece.
He was 81 years of age.
The Funeral Service will be chanted tomorrow, Wednesday, at 1 p.m. in the afternoon at the newly built Church of the Theotokos the Healer, in Kalamata, by His Grace, Bishop Cyprian of Oreoi, Acting President of the Holy Synod, and His Grace, Bishop Klemes (Clement) of Gardikion, along with other Synod clergy.
The burial will take place at his Hesychasterion in Petalidi, Messenia (in the Peloponnesos), Greece.
* * *
Aionia he Mneme! May His Memory be Eternal!
* * *
Biography of Bishop Chrysostomos from the Synod Website
His Eminence, Bishop Chrysostomos of Sydney and New South Wales was born in Petalidion, Messenia, Greece, in 1929.

Bishop Chrysostomos was clothed in the monastic habit, at the young age of fourteen, on the Holy Mountain of Athos, where he lived as a monastic at both the Skete of St. Anne and Esphigmenou Monastery.
While on Mt. Athos, he studied at the famous Athonias School, subsequently completing his theological degree at the University of Thessaloniki.
His Eminence served for a number of years as a clergyman under the Oecumenical Patriarchate as an Archimandrite in the (New Calendar) Archdiocese of Australia. He was active in the establishment of Greek schools and the development of Church life in the immigrant community of that country. In 1970, unable in his conscience to accept the increasing innovations and ecumenical excesses of Constantinople and its Exarchate in Australia, he walled himself off from his former jurisdiction for reasons of Faith.
His Eminence was Consecrated a Bishop in 1971. He did not cease his former activities, but continued founding Churches, schools, and a convent. Distinguished as a teacher, his contributions to the ecclesiastical and cultural life of the Greek immigrant community in Australia have earned him widespread accolades for his labors.
In 1993, Bishop Chrysostomos, after examining the theological, ecclesiological, and canonical status of the various Old Calendarist groups in Greece, decided to join the Holy Synod in Resistance. On 30 September 1993 (Old Style), the Holy Synod elected him the first Bishop of the newly-established Diocese of Sydney and New South Wales and named him Synodal Exarch in Australia. He was enthroned on 30 June 1994 (Old Style). 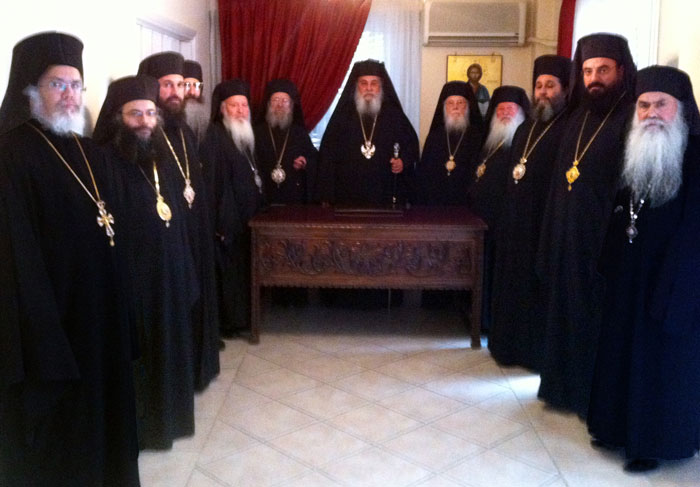 Bp Auxentios of Photiki: A Revolting Attempt to Profane a Sacred Event