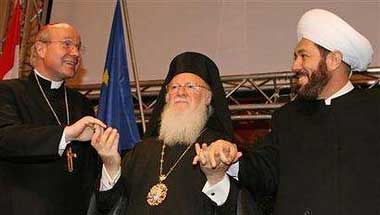 The full article is available by clicking the title. It is impossible to interpret the Patriarch’s words any other way– World Orthodoxy’s dialogue with the Pope, Islam, and Judaism is rooted in the 1920 Encyclical, the implementation of which caused the split between the World Orthodox and True Orthodox throughout the world.


“Fighting from within” will only leave you two choices: giving up or getting out. We are often asked why we put up these articles. They’re just a reminder: anyone who says “ecumenism isn’t real” or “ecumenism is finished” is either lying to themselves, lying to you, or both.


Things are just getting worse on that side of the fence. NFTU

(asianews.it) by NAT da Polis: The Ecumenical Patriarch defends the choice of dialogue with Catholics, Jews and Muslims, despite criticisms from some sectors of Orthodox traditionalists. Ecology: “The environment, nature, are God’s creation and do not belong only to us who live today in 2010. They belong to all future generations. “

Istanbul (AsiaNews) – On the eve of the holiday season, Bartholomew I delivered a major address before an highly qualified audience from the Orthodox world, defending the Ecumenical Patriarchate’s choice for inter-faith dialogue. “We will insist on dialogue, despite the criticism that we suffer,” he said. “There is, unfortunately, a certain religious fundamentalism, a tragic phenomenon, which can be found among Orthodox and Catholics, among Muslims and Jews. These are people who think they alone have the right to exist on earth, almost as if they alone have the right to rule on this our planet according to the Old Testament. And they say there is no room for anyone else, and are therefore opposed to any dialogue. “

The Patriarch continued: “We are subject to criticism and attack because we maintain relations with the Pope (because we are strong supporters of the ecumenical dialogue between Orthodox and Catholics), with Islam and the Jewish world. But we will continue to move forward on our journey, according to the path laid by our predecessors, well aware of our actions, regardless of the criticisms of which we are object. These fringes, characterized by extreme positions, are everywhere. It is therefore natural that we suffer their criticisms, according to their ideological dictates, all of us who try to widen our horizons and have a theological view of things. Because we want the peaceful coexistence of all, based on the principles of charity and friendship. “

Bartholomew I added: “This is the credo of the Ecumenical Patriarchate and I want to remember that in 1920 the regent of the patriarchal see, along with the synod, had addressed to Catholics and Protestants an encyclical, called ‘The community of churches’, along the lines of the newly created ‘society of nations’. That encyclical is considered today by the World Council of Churches as the ‘Charter’ of the ecumenical movement of our time. This is a well known fact to insiders, and it is good that it should be made as widely known to as many people as possible”.

Nun’s death may be linked to Pope: Somali Islamist