Hat tip: R.D. The image is on the original article, and I am not sure I want to copy it for the site. The description is below. —DJS

(bbc.co.uk) An unholy row has broken out in New Zealand over a church billboard aimed at “challenging stereotypes” about the birth of Jesus Christ.

A dejected-looking Joseph lies in bed next to Mary under the caption, “Poor Joseph. God was a hard act to follow”.

St Matthew-in-the-City Church in Auckland, which erected the billboard, said it had intended to provoke debate.

But the Catholic Church, among others, has condemned it as “inappropriate” and “disrespectful”.

Within hours of its unveiling, the billboard had been defaced with brown paint.

The church’s vicar, Archdeacon Glynn Cardy, said the aim of the billboard had been to lampoon the literal interpretation of the Christmas conception story.
Mary and Joseph billboard from St Matthew-in-the-City church in Auckland
The billboard was defaced within hours of its unveiling

“What we’re trying to do is to get people to think more about what Christmas is all about,” he told the New Zealand Press Association (NZPA).

“Is it about a spiritual male God sending down sperm so a child would be born, or is it about the power of love in our midst as seen in Jesus?”

He told NZPA that the church had received e-mails and phone calls about the controversial image.

But Lyndsay Freer, spokeswoman for the Catholic Diocese of Auckland, said the poster was offensive to Christians.

“Our Christian tradition of 2,000 years is that Mary remains a virgin and that Jesus is the son of God, not Joseph,” she told the New Zealand Herald. “Such a poster is inappropriate and disrespectful.”

The family values group Family First said any debate about the Virgin birth should be held inside the church.

“To confront children and families with the concept as a street billboard is completely irresponsible and unnecessary,” Family First director Bob McCroskrie told the news website stuff.co.nz. 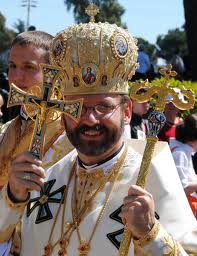 Greek Catholic Patriarch Responds to Charges of Being “Liberal” on Homosexuality