Felonies In Case You Missed It Russia
September 10, 2012 NFTU NEWS

The US government very well knew the evil it had allied with, and didn’t care; or, didn’t care enough. For some strange reason, people have viewed Nazism as more ‘dangerous’ than communism, though, Communists have killed far more than the Nazis ever did. Therefore, it is no surprise that the US government, which has been controlled by powerful business and banking interests for years, should have sought to ignore or cover-up the Katyn Massacre. The Katyn Massacre, is a general name for the massacre of Polish military officers, landowners, priests, factory owners, intelligentsia and others. As the well-known economist Anthony Sutton has pointed out, there has always been a seemingly strange and perverse connection between powerful American and Western business interests and Communists.

Therefore, to those who would put any ‘hope’ in the US authorities, I would say your ‘hope’ is very much misplaced. The US government has long sought to maintain alliances with dictatorial regimes, and set up pseudo-enemies.  The fact that it would intentionally cover-up something like this should not be surprising.

Sadly, for the masses of persons, who think the powers and governing authorities would never do anything underhanded, never conspire against us, this should be one of many examples that the contrary is true. It does not take one being the characterized figure of a ‘ten-foiled hat’ wearer, to see something staring you in the face. The mass graves that dot the former Communist nations, are still there. Katyn has become somewhat symbolic for the Poles, and it should be for us as well. 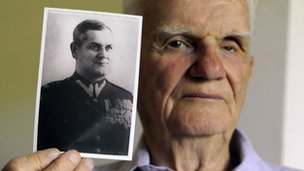 As the 1,000 pages of material are analyzed by hundreds of sources, the exact nature of things will be made manifest. For the victims of Soviet repression, to be told by US government AND Soviet authorities in concert, that they were ‘conspiracy theorist’ for nearly 50 years, and now to be suddenly vindicated in a gradual 20 years process (starting with Soviet admission of the crime in 1990, since it was previously and officially blamed on the Nazis), will be little comfort.

For those who have died, both Poles, Russians, Ukrainians, Belorussians, etc, and all peoples, tens of millions who were worked to death, tortured to death, shot, gassed (yes, the NKVD had used this method before the Germans), and otherwise murdered, there will be no justices in this life. There will be no trials and court hearings in Russia or any other nation; if justice cannot be had for war crimes committed by American, Western and Israeli forces, what possible hope could their ever be for those seeking justice in nations that have no history of a rule of law for nearly 100 years?

As the 1952 Congressional Committee, which found the Soviets guilty of the massacre, stated:

“This committee believes that had the Van Vliet report been made immediately available to the Dept. of State and to the American public, the course of our governmental policy toward Soviet Russia might have been more realistic with more fortunate post-war results.”

No one listens, not one. Too much money was to be made in the Cold War business. To have refused alliance with the Soviet monster would have meant a continuous 10 years death roll between the Third Reich and the Soviet Empire; one in which American help was not concentrated on Europe but on defeating Japanese aggression.  Such a conflict would have completely destroyed both the Soviet and Nazi regimes; powers in American had to pick one side to do business with in the aftermath. It was alright to demonize (but, fund them) after wards, but, not during the war.

The warnings of God through the prophets are always there. There are no exceptions, and an honourable humbling (by admitting wrong) is better than a lionized lie.

Woe unto them that call evil good, and good evil; that put darkness for light, and light for darkness; that put bitter for sweet, and sweet for bitter!

Countdown: Is the Kremlin behind the Punk Trial– or the MP?