According to the website for the Eparchial Synod of the GOC-K in America, Metropolitan Demetrius has concluded his long visit to Greece with a visit to a monastery:

His Eminence Metropolitan Demetrius left the monastery of the Life-giving Spring in Krioneri, Attika, and concludes his trip to Greece by visiting the monastery of St Cyprian and Justina. His Eminence will be returning to the Holy Ascension Monastery, his residence, this coming Wednesday.

As reported previously (here and here), Metropolitan Demetrius from January 17th to January 25 visited with other hierarchs of the GOC-K, as well as monasteries, churches, laity (as well as making a trip to Florina, the home town of his parent).

Because of Metropolitan Demetrius’ absence on official business to Greece (such as a previously mentioned Synodical Celebration of Holy Theophany), Metropolitan Pavlos, the former Metropolitan of America for the Eparchial Synod, along with Bishop Christodoulos served the Liturgy and rites for the Feast of the Holy Theophany.

To see additional pictures of Met. Demetrius’ concluding visit to the monastery of Sts. Cyprian and Justina, go here. 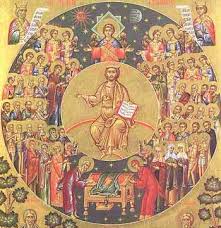