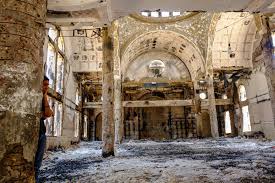 The well-known OCA Archpriest, Fr. Robert Arida, who serves directly under OCA Archbishop Nikon of Boston, at the OCA Holy Trinity Cathedral, in a work which is only entitled “How to Expand the Mission”, (which will be the theme of the upcoming 2015 OCA “All-American Council” in Atlanta, Georgia,) calls for the Scriptures, Tradition, Liturgical books and Fathers to be ‘clarified’ and ‘corrected’, as well as re-interpreted in light of modern culture.  Fr. Robert has been prominently known as supporting the ‘gay lifestyle’ as acceptable, even involved in another recent controversy where, in a work published on the OCA “Wonder” blog (which is geared toward young people), he called upon the moral teachings of Orthodoxy to be altered to better serve modern ‘culture’.

In the article linked above,  Fr. Robert laments that many perceive Orthodoxy to be little different than ‘fundamentalism’. Fr. Robert states:

“If the Church is to “expand its mission” it can no longer turn away from, ignore or condemn questions and issues that are a priori presumed to contradict or challenge its living tradition. Among the most controversial of these issues are those related to human sexuality, the configuration of the family, the beginning and ending of human life, and care for the environment. If the Church is to “expand its mission” then, in and through the Holy Spirit, it must be able to expand the understanding of itself and of the world it lives in.“

In other words, without saying it ‘directly’, but in a somewhat oblique manner, Fr. Robert advocates that the traditional Orthodox Christian understanding of marriage, the family, abortion, euthanasia, etc, must be changed.  Indeed, as his fellow World Orthodox clergy have stated, openly gay ‘couples’ are communed at the Cathedral and are encouraged in their lifestyle.  Fr. Robert continues throughout the essay to explain how he thinks the ‘static’ understanding of theology and morality is wrong, i.e., the Orthodox understand. Fr. Robert states:

In other words, you can ‘eternally dynamic’ yourself into accepting anything and everything as long as you claim it is the ‘mind of Christ’ and speak against those nasty static fundamentalist who are only concerned about Church Tradition. Fr. Robert goes on to state:

“With the expansion of the Church’s mind and heart what is of the past can be augmented. Consequently, Holy Scripture can continued to be interpreted and clarified. Patristic writings can continue to be re-assessed and even corrected. Liturgical texts can continue to be composed while existing texts can be revised. With the expanded mind and heart of the Church the ministry of Christ will be able to expand through the creative operation of the Holy Spirit. This will allow the Church to maintain its authentic voice, the voice of Christ, as it expands its mission for the life of the world and its salvation.”

In other words, as long as we speak in round about ways, speak of ‘openness’, the “Spirit”, etc, we can justify anything as long as it is in line with the degenerate modern culture which Fr. Robert embraces along with its acceptance of homosexuality and abortion, and whatever other ‘challenges’ modern culture presents.  Fr. Robert is clearly  heretical, but, so is the OCA as an whole.  The idea that you are supposed to ignore heretics, heresies, and all the rest, is false. The Fathers didn’t ignore Arianism, Gnosticism, Nesotrianism, Papism, or these groups after they had been expelled from the Church; they didn’t say, “Well, we don’t care what they do. Let’s just ignore it. It doesn’t matter to us.”  Reading St. John Damascene’s “Exact Exposition” should change your mind on that.

Yet, what about the critics of Fr. Robert Arida. Well, they are correct on the main points of criticism.  Yet, there is just as much of a problem with them as with Fr. Robert Arida, though, on a different front. Fr. Robert is clearly censurable on all counts. But, his opponents, while not accepting the new heresy of immoralism, have no problem accepting other bits of the modernistic heresy and ecumenist heresy.  How can Fr. Johannes Jacobse justify being in communion with the condemned Syro-Jacobite heretics who have been under anathema for 1500 years?  How can the World Orthodox clergy who censure the immoralist heretic Fr. Robert justify their union with Syro-Jacobites for the Antiochians, or their betrayal of the Catacomb New-Martyrs who condemned the MP as a graceless parasynagogue? Fr. Robert Arida is merely a consistent modernist and ecumenist in his thought; going to the logical conclusion of what has been taught in World Orthodox circles for decades now.

His opponents essentially think in what may best be described as a ‘conservative Anglican’ mentality. That is, they are rightly opposed to certain ‘aspects’ of modernism, noticeably immoralism (what Fr. Robert teaches), but, they have no problem with fundamental criticism of the Holy Scriptures (denying historicity of the Old Testament on many counts), abolition of fasting, joint-prayers with heretics, ecumenism, etc.  In other words, like conservative High Church Anglicans, they have a base line of ‘dogmatic belief’, which probably means some Ecumenical Councils (though they no longer see the 4th Council as binding), some concept, vague as it is, of the Real Presence, and are probably turned away from the women’s ordination heresy (which is also being promoted in the OCA, Greek Archdiocese, and many of the “World Orthodox” groups).  So, as long as women aren’t ordained, and gay marriage isn’t openly proclaimed (as opposed to what happened in the Anglican church in the 50s and 60s when it was all being done secretly, as it is being done in the OCA and others, or not so secretly, as it is admitted openly gay ‘couples’ are communed in the OCA, Greek Archdiocese, others, as well as women being ordained readers and proclaimed to have received the ‘first degree of the priesthood’), then, they will most likely be happy where they are.   If these things do happen, they will undoubtedly not know what to do, since they have assumed it was impossible (I’m sure they thought having OCA clerics and others teach what Fr. Robert teached was ‘impossible’ 20 years ago, but here it is).

Fr. Robert Arida is universally censurable on all counts as a promoter of heretical modernism, ecumenism, immoralism, and everything under the sun.  But, the World Orthodox clergy have either intentionally hidden their head in the sand or they are really stupid and oblivious to what is happening.  The same battle many of them went through in the Episcopal Church, the Roman Catholic Church, the different Protestant denominations, is now coming to the OCA, ROCOR-MP, Greek Archdiocese, etc, parish near you.  Thus, it seems a little disingenious for them to condemn Bp. Stephan of Trention, or any other True Orthodox and complain that they don’t want to be part of “World Orthodoxy”, when being part of World Orthodoxy implies having to deal with not just the heresies of ecumenism and modernism, but, promotion of gay marriage, abortion ‘rights’, euthanasia and the rest.  Out of the frying pan and into the holocaust.

Most don’t want True Orthodoxy, because most still want to have ‘some respectability’ with the mainline world.  They want acceptability; they want to pal around with Papists and Protestants. They still want the comfort of nice big churches and finances.  They are, in other words, all heavily institutionalized and cannot operate outside such a framework.  They certainly don’t want horrible and slanderous articles written up about them in the Antiochian “Word” magazine if they leaven to join  True Orthodoxy (as has happened before). What they want is to have their cake and eat it.  The cake, however, is poison.  The concept that they would ever loose everything, all their ‘clergy friends’, get nasty emails, and have to start from absolute scratch terrifies them beyond belief. St. Paul said:

“But what things were gain to me, those I counted loss for Christ. Yea, doubtless, and I count all things but loss for the excellency of the knowledge of Christ Jesus my Lord; for Whom I have suffered the loss of all things, and do count them but dung, that I may win Christ.” (Phil. 3:7-8)

The modern ‘culture’ that Fr. Robert is so eager to embrace and accept definitely doesn’t wish to have ‘fundamentalism’.  Of course, they intentionally neglect the fact that what they are trying to connect to traditional (True) Orthodoxy  is traditional conservative Protestantism.  But this is false attempt at a connection; Orthodoxy does not accept the heresies of sola-scriptura, grace-alone, denial of the Holy Mysteries, icons, the doctrine of the Church, all of which means Protestantism isn’t part of the Holy Church.  I’m sure then they’ll just go ahead and say, “But, your thought is like the Protestants, even if your doctrine isn’t.”   What thought, we may ask? The idea that Adam was real? Moses was real and the Exodus actually happened? That Christ walked on water? The Holy Lady was a Virgin (though most Protestant don’t accept the full truth of the later)?  The real Protestant attitude is to be in rebellion against the Church Tradition; this being the case, it is in fact both Fr. Robert and his conservative eastern-rite ‘Anglican’ opponents who fit the bill.

Therefore, I proffer that it is Fr. Robert who is in fact Protestant in his mentality; liberal Protestant to be exact.  His words are exactly the same as many of us have heard in religion and seminary classes in Protestant institutions and caused us great distress.  Fr. Robert and many like him would no doubt be received with great acclaim at Princeton Theological, Duke Divinity, or Emory.

An Open Request for Information from Fr Chad Hatfield

The New Theologians by Hieromartyr Victor of Vyatka 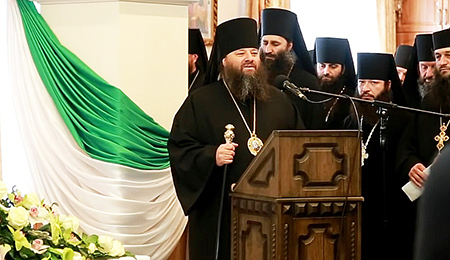 Bishop Longinus to Romanian Patriarchate: Stop Persecuting Those Who Stand for Orthodoxy!

One thought on “OCA Priest Robert Arida: Scripture and Fathers Should be “Clarified” and “Corrected””