Metropolitan Agafangel of the ROCOR-A has been officially “deposed” by the ROCOR-Moscow Patriarchate for his refusal to go on with the union of 2007, and has issued the following response:

It has been enjoined on me to repent or appeal this decision within a four-week time period.
But it has not been stated before whom one should “repent or appeal” – before the higher [appellate] instances: the Synod of the MP and His Holiness?
I wrote on 17 May 2007 that “for myself, I continue to consider the decrees and other orders of any instance of the Moscow Patriarchate’s ecclesiastical authority as not having canonical force,” inasmuch as I do not recognize the hierarchy of the MP as a lawful authority in the Russian Orthodox Church, just as the Russian Church Abroad has never recognized that authority as lawful throughout her whole history.
In essence, this is all that I can communicate on the matter in question to those who have signed this document, and this text, if you please, may be considered my official response (I have become acquainted with the aforesaid decision only through the Internet).
It is a pity that the hierarchs have decided take the path of “burning bridges” and I do not believe that the initiators of this step are those to whom the Church Abroad is dear. God will judge between us.

The Deposition Reads as Follows:

On August 19September 1, 2009, the ROCOR Synod of Bishops heard the following case:

The matter of the suspension of Bishop Agafangel of Odessa and Taurida from serving.

Immediately after the signing of the Act of Eucharistic Communion between the Moscow Patriarchate and the ROCOR on May 417, 2007, Bishop Agafangel and his clergy severed canonical communion with the ROCOR and declared that they, along with clergy from several other ROCOR dioceses who joined them, considered themselves to be the true ROCOR.

Since then, Bishop Agafangel, while under suspension, unlawfully ordained new “bishops” and priests and continued to serve at liturgies.

Since Bishop Agafangel along with his clergy entered into schism, the ROCOR Synod of Bishops avers that any revolt against legal authority is a manifestation of a lust for power. Similarly, the willful departure of a bishop out from under the authority of his metropolitan and Council of Bishops is considered by the holy rules to be a seizing of power. Therefore, the initiators of this revolt, and those clergy and laypeople who followed them, are committing the grave sin of disregarding the order set down by God, as they are separating themselves from the Church.

The 14th rule of the Double Council of Constantinople states: “The holy Council made this determination that a bishop, who claims his metropolitan is in error without it being determined by a council, and severs relations with him and does not commemorate his name, as it is accepted, during the Divine Liturgy: may he be deposed, if he is so accused, since he has departed from his metropolitan and caused a schism. For each of us must know his measure, a presbyter may not spurn his bishop, a bishop may not spurn his metropolitan.” (See also: 13th and 15th Rule of this Council; 18th Rule of the Fourth Ecumenical Council; 31st Rule of the Holy Apostles; and others.)

On the basis of the findings presented here and that Bishop Agafangel continued serving though under suspension, the Synod of Bishops of the Russian Orthodox Church Outside of Russia decrees:

+Metropolitan Hilarion
Chairman of the Synod of Bishops

+Archbishop Kirill
Secretary of the Synod of Bishops 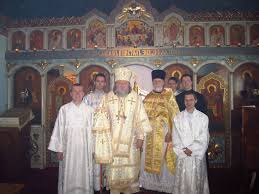