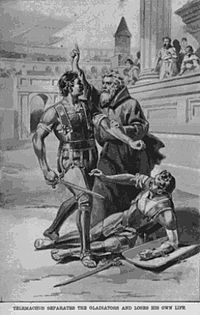 St. Telemachus is perhaps one of the very lesser known saints.  His day of martyrdom is January 1st, so, obviously, he was to be overshadowed by the Feast of the Circumcision of Christ, as well as the commemoration of St. Basil the Great.  But, St. Telemachus deserves mention nevertheless.

The Blessed Theodoret, in his Ecclesiastical History, records the following short, but amazing account:

“The successors to the empire inherited the piety of their father. Honorius, who had received the empire of Europe, abolished the ancient exhibitions of gladiators in Rome on the following occasion. A certain man name Telemachus, who had embraced the monastical life, came from the East to Rome at a time when these cruel spectacles were being exhibited. After gazing upon the combat from the amphitheatre, he descended into the arena, and tried to separate the gladiators. The sanguinary spectators, possessed by the demon who delights in the effusion of blood, were irritated at the interruption of their cruel sports, and stoned him who had occasioned the cessation. On being apprised of their circumstance, the admirable emperor numbered him with the victorious martyrs, and abolished these iniquitous spectacles.” (Ecclesiastical History of Blessed Theodoret of Cyrus, 5th century, Book VI, Ch. XXVI)

The Roman Martyrology records the following:

“In Rome, St. Telemachus, martyr, whom the gladiators put to death by order of Alipius, prefect of the city, because he said aloud: “Today is the Octave of the Nativity of Our Lord; renounce the superstitious worship of idols and henceforth abstain from offering iniquitous sacrifices.”

It is true that St. Constantine, years previously had issued decrees making illegal such great evils as abortion, infanticide, crucifixion, and gladiatorial games.  But, many of these great evils are very difficult to extirpate, and often show their demonic heads again and again in history.  The great Orthodox Christian poet and Latin hymn writer, Aurelius Prudentius Clemens, in his work, “Contra Symmachi Orationem”, delivered against the influence of the Pagan Senator and magistrate Symmachus (who was well-known for representing the forces of Pagan tradition, including the bloody gladiatorial games) castigates these great evils, saying:

“What ravages other to itself doth the impious art of the game will,
What deaths of young men, what pleasure by blood nourished?”

Prudentius, however, much later, shows praise for the Emperor Honorius:

“He forbade the City to be stained by the blood of bulls,
Thou shalt prohibit to be offered the deaths of unhappy men,
Not one in the City may fall, the pleasure of which may be pain,
Nor may its own maidenhood delight countenances by slaughters,
Now the infamous arena contented by alone wild beasts,
Let no more homicides entertain in bloodstained arms.”

The Emperor Honorius, obviously, was so impressed, as Blessed Theodoret states, to put an end to these bloody spectacles, these sacrifices to devils, once and for all.

Of St. Telemachus what can we say? The pleas of Christian hierarchs and clergy for nearly 80 years had apparently done little to impress a forceful change.  How man Christians were in the Coliseum watching the blood-stained spectacles?  Orthodox Christians, like St. Telemachus, St. Lawrence the Martyr, etc, ‘who neither feared to live, nor were afraid to die” did more than all the pleas, sermons, homilies, speeches, and laws had accomplished together.

“Yea, a man may say, Thou hast faith, and I have works: shew me thy faith without thy works, and I will shew thee my faith by my works.” James 2:18 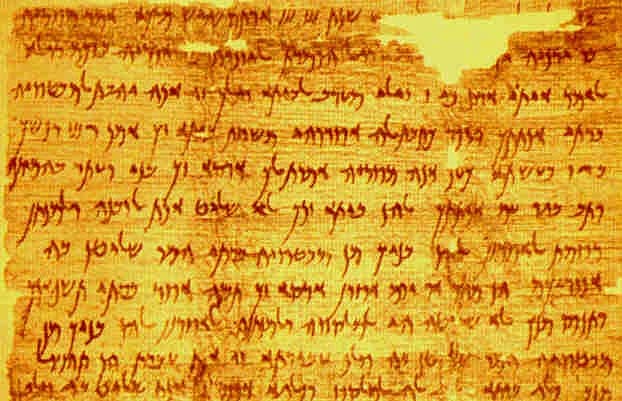 ISIS Exterminating Aramaic; the Language of Our Lord