Perhaps declaring yourself to be two religions is where the Episcopal Church draws the line. What’s truly tragic is that if she just changed to a different Episcopal Bishop in the US she would have been “ok”. It is precisely as Dr Overbeck of blessed memory, father of the modern Western rite movement in Orthodoxy, judged Anglicanism over 100 years ago when he condemned the Ecumenism of the Anglican Church.* NFTU

(Religious Intelligence) In a June 2007 interview with the Episcopal Voice, the Seattle-based Diocese of Olympia’s newspaper, the Dr. Redding announced she was both a Christian and a Muslim. “The way I understand Jesus is compatible with Islam,” she said. “I was following Jesus and he led me into Islam.”

The former director of Christian Formation at St Mark’s Episcopal Cathedral in Seattle, Redding began to study Islam in the wake of 9/11 after hearing Muslim imams speak at inter-faith events at the cathedral. A personal crisis spurred her onto a spiritual quest that ended with her publicly reciting the Shahada, the Muslim profession of faith. 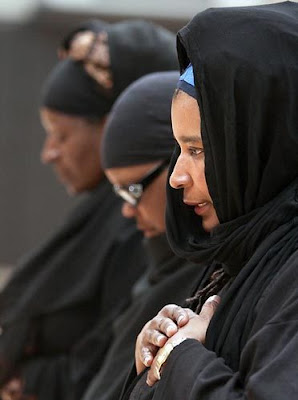 (the statement that There is no God but Allah, and Mohammad is his prophet) does not contradict Christian doctrine, Dr Redding told the Episcopal Voice, nor did the professions made at a Christian baptism contradict anything in Islam, for the language of the creeds and the Koran were not to be taken in a literal sense.

“We Christians, in struggling to express the beauty and dignity of Jesus and the pattern of life he offers, describe him as the ‘only begotten son of God.’ That’s how wonderful he is to us. But that is not literal,” she said.

*“Broad-Churchism strikes at the very root of Christianity. And do you think, after this, that Broad-Churchmen really care a bit for Intercommunion between the Orthodox and English Churches? They like to be left alone; they have no wish to be bothered in their state of perfect ease and comfort; and if they do wish for any Intercommunion at all, it is not with Christians only, not with Jews and Mahommedans only, but with Parsees, Hindoos, and Zulu-Kaffers (as soon as properly educated). Why should we intrude upon Churchmen who consider it the greatest glory of the English Church, that she is so spacious as to accommodate all shades of religious opinions; that she is not so narrow-minded as to exclude any newcomer, or to ask him after his Christian credentials. This forcibly reminds me of the large barrack-like Parisian “Cités” which accommodate hundreds of families without any other mutual bond but the bare walls of the building.” (Catholic Orthodoxy and Anglo-Catholicism, 1866.)

ROCOR and its Relations with the Roman Catholic Church

In Honor of the World Cup: More Ecumenism