The GOC-K in America recently had the grand opening of St. Mark of Ephesus Cathedral in Westwood,  Massachusetts, at which was present Archbishop Andronik of Syracuse of the ROCOR-A.

Metropolitan Demetrius, Metropolitan Moses and Bishop Sergios were originally bishops in HOCNA, but, left in 2012 after they could not accept the proclamation of the Name-Worship Heresy in the HOCNA Synod.  The same followed with most of the HOCNA clergy leaving.  They all then joined the GOC-K in America.  Timeline of the events can be found linked here on NFTU.

Additional pictures of the bishops can be found here.

GOC-K to Hold Glorification for Metropolitan Chrysostomos of Florina (+1955) 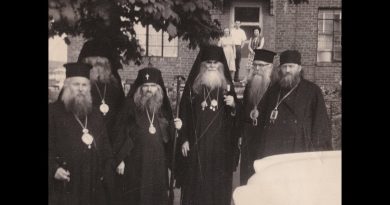 The Ecumenical Patriarchate Thinks St. John of Shanghai was a Schismatic. We’d Like a Word.

Baptism and Economy in Relation to the Arians