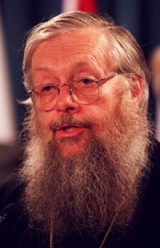 (Montreal Gazette) WINNIPEG — A victims’ group is outraged that a parish is using a church website to raise defence funds for a disgraced former Winnipeg cleric facing sexual abuse charges.

“It’s terribly inappropriate and intimidating when parishioners publicly help an alleged child molester, especially through a church website,” said Melanie Jula Sakoda of the Chicago-based Survivors Network of those Abused by Priests.

A Vancouver parish of the Russian Orthodox Church in America posted three messages of support for Archbishop Seraphim Storheim, including one with an address in Edmonton to send funds for his defence.
Storheim’s first court date in Winnipeg is Jan. 10, but he is not expected to attend in person.

Storheim was the highest-ranking official in the Russian Orthodox Church in Canada until officials suspended him in November, days after Winnipeg police laid charges against him.

Police conducted a lengthy investigation this year into allegations Storheim sexually abused two teenage boys while he was a priest in Winnipeg 30 years ago.

In December, the church distanced itself from the Vancouver parish with a statement that said in part: “The Archdiocese of Canada for the Orthodox Church in America is not in any way associated with any legal fund or other defensive effort being set up to aid Archbishop Seraphim.”

Sakoda’s association wrote the church Wednesday, asking for the pages to be removed from the website. Church officials in Canada and the United States declined to comment.

The archbishop’s criminal lawyer, Jeff Gindin in Winnipeg, said: “Everybody is innocent until proven guilty. That’s how our system works.

“Obviously when you have a high-profile case, everybody starts talking.”

Gindin said the suspended archbishop adamantly denies the charges and has many friends and supporters. He would not say where the priest is living.

The U.S. advocacy group for abuse survivors said the claims against Storheim first surfaced about two years ago. They involve men who claim the priest abused them in the early 1980s when they visited his Winnipeg parish as 10-year-olds.

“Victims of childhood sexual abuse are afraid that no one will believe them if they tell of abuse by a respected religious figure. Pages and links like those on the Vancouver site only confirm those feelings,” Sakoda said.

Nashotah House and St Vladimir’s Seminary Sign “Covenant”– But What is it?

Another OCA Bishop Placed On Leave for Moral Allegations

Mark those calendars: Ecumenical gathering in Washington DC in June