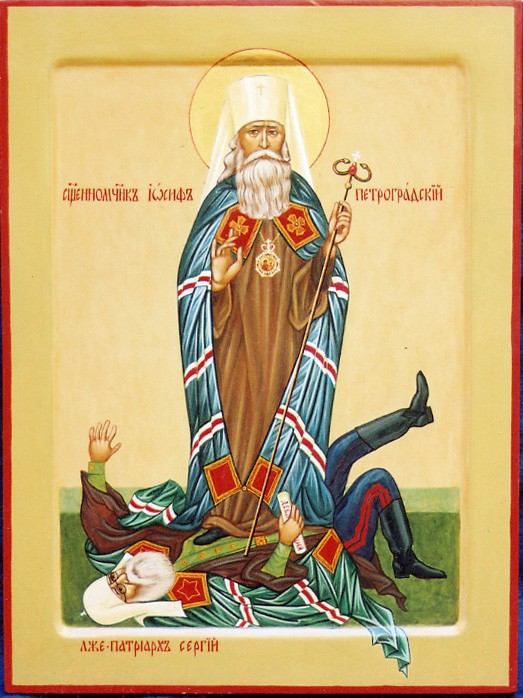 On the heels of the recent controversies in ROAC concerning the deposition and suspension of various clergy, a controversial new icon has dominated discussion among Russians and diasporites in the ROAC and the MP.

On September 5, a new icon was commissioned by a member of the Makarian-Synod parish in St Petersburg, and depicts St Joseph of Petrograd, known as the leader of the catacomb Church, standing over Metropolitan Sergius (Stragodorsky), garbed in a Soviet uniform under his cassock. The icon, placed online by Fr Alexey Lebedev of St Petersburg’s St Mary of Gatchina Parish (ROAC), spawned hundreds of comments demonstrating an incredible range of anger and support, as well as spawning a discussion of proper iconographic types. Comments from members of the Moscow Patriarchate ranged from shock to outright anger while comments from ROAC and ROCOR members ranged from cheers to disgust.

On the Russian Internet, the icon has even been picked up on secular filesharing sites and seems to be gaining a sort of cult popularity, revealing a deep wellspring of distrust of the Moscow Patriarchate even among unchurched Russians.

Neither the Synod of the ROAC nor that of the ROCOR-V in Russia, which includes the iconographer in its membership, has made an official statement yet on the matter. NFTU