President of Georgia, Mikheil Saakashvili and the Catholicos-Patriarch of All Georgia Ilia the Second laid flowers at the graves of soldiers fallen in the Russian-Georgian War in 2008 at Mukhatgverdi military cemetery on August 4. Thanking the families of the soldiers, Saakashvili encouraged their bravery and remembered the heroism of the young soldiers affected by the August war.

“Our boys have sacrificed their lives to drive back the enemies at the entrance to our country. This was not an accident and these two years have proved that – their families have kept their respect with deep melancholy. See how they have all overcome the pressure and provocation and concealed their greatest tragedy,” the President said thanking the Georgian mothers for their respect and stressed they didn’t accidentally given birth to heroes.

“Our enemies don’t deny that they were preparing for an attack years ago, but provocations became apparent in the summer of 2008. I remember how long we discussed whether or not to withdraw our army from Iraq due to the increase of the Russian armies in the occupied regions. I’m very proud of the results found by the international organizations working on the human rights’ issues. Many of you had been enjoying vacations at that time, but that’s the fate of our multi-ethnic country – mobilization to stop the enemies has become our instinct,” the President said in his speech.

Despite the fact that the two Georgian regions remain occupied, Saakashvili stressed that Russia failed in implementing its geopolitical purposes against our country. He shared the concern of the Tskhinvali population which does not condemn the Georgian position. “It was a great surprise for me to hear this information from a particular authority. They have seen how bravely our soldiers were fighting for their lives and the majority ethnical Ossetians have really moved here,” Saakashvili told the guests.

“Georgia can fight. Our enemies couldn’t overthrow the Georgian government and change the political course; the enemies couldn’t manage to revive the soviet influence by destroying Georgia. On the contrary they failed in isolating our country and became isolated from the international community themselves. Georgia became a symbol of success in the post soviet space by overcoming the Russian imperialist influence. It’s an important encouragement for countries to raise their voices for freedom,” the President stated.

Highlighting the unity of the Georgian faith and statehood the President said that our life is a big struggle for Georgia’s eventual and complete liberation. “Catholicos-Patriarch – the symbol of undefeatedness is here today and the church built at the cemetery is dedicated to our soldiers. We are obliged to stand up and go on walking on the way of success dedicated to our heroes after each stumble. Our lives belong to our country and those fallen for our county,” the President said praying to God for Georgia’s safety.

His Holiness and Beatitude Ilia the Second blessed the cemetery church and prayed for Georgia’s welfare. Welcoming the improved attitude between the army and society Catholicos stressed the importance of unity within the country and encouraged soldiers to attend liturgies and pray for their country 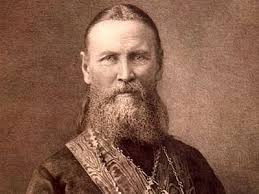 St. John of Krondstadt and the Renovationists by Vladimir Moss

RTOC: Is there Grace in the Moscow Patriarchate?

TOC-R Letter to American Metropolia: Cessation of Communion Unless You Accept Name-Worship