Many have not had the time or inclination to do a great deal of research into the trial taking place in Russia, nor into the events which precipitated it. I would not say that of those on this site, but, definitely, it seems in many other places.  For example, would one be surprised to learn that the punk rock group in question has heavy connections to Western government funded organizations; as well as connections to pro-extremist groups? NGO organizations run by George Soros? Or other groups heavily funded by the US government, and other Western powers that have  goals inimical to the current Russian government (and even inimical to all good in general, irrespective of the problems of Russia)? There are two authors who go over a lot of this information. Here and Here.

The collective “Voina” of which this group is a part, has repeatedly engaged in very horrific acts in the sight of children and in public.  And, the ‘mock prayer’ to the Theotokos, that this song performed in the Cathedral contained, was laced with a great deal of obscenities.  While a few years is, I agree, too much, the reaction of all in this matter as regards the group and its wider associations must be guarded. This would have been similar if this had occurred in Poland or many other nations, so, Russia itself is not unique.

Even those who greatly dislike the Putin policies, United Russia, and all the methods employed, must also realize that there are opponents in Russia who have just as sinister plans for the nation.  We often think in terms of two-dimensional ‘warfare’ of sorts; but, the world today is one in which you have asymmetrical warfare.  One side is attacked by another side, both are painted as good or evil, and a false dialectic is created; each side is forced to either support or accept the general agenda of the other and any attempt to raise questions about, and entirely reject, the proposed dialect and false dichotomy is met with astonishment, scorn, or equal hatred as to the enemy.  While, in the meantime, the powers behind the scenes are involved in funding both sides; and even in those situations in which they aren’t, the elite have a means of turning any opposition to them to their own advantage.

Nevertheless, why is it when one looks at articles on many of these organizations with ties to the anti-Putin groups, you always have to see pictures with Phanar hierarchs in them; like this one in which the “National Endowment for Democracy” gives an award to a Tunisian revolutionary (the one who helped overthrow their previous dictatorial government and institute coalition rule by socialist and Islamic factions): 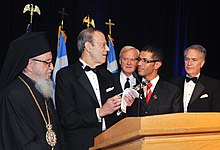